What we do - Participation

…democracy is defined as : (a) government by the people … key elements: (b) The active participation of the people, as citizens, in politics and civic life. 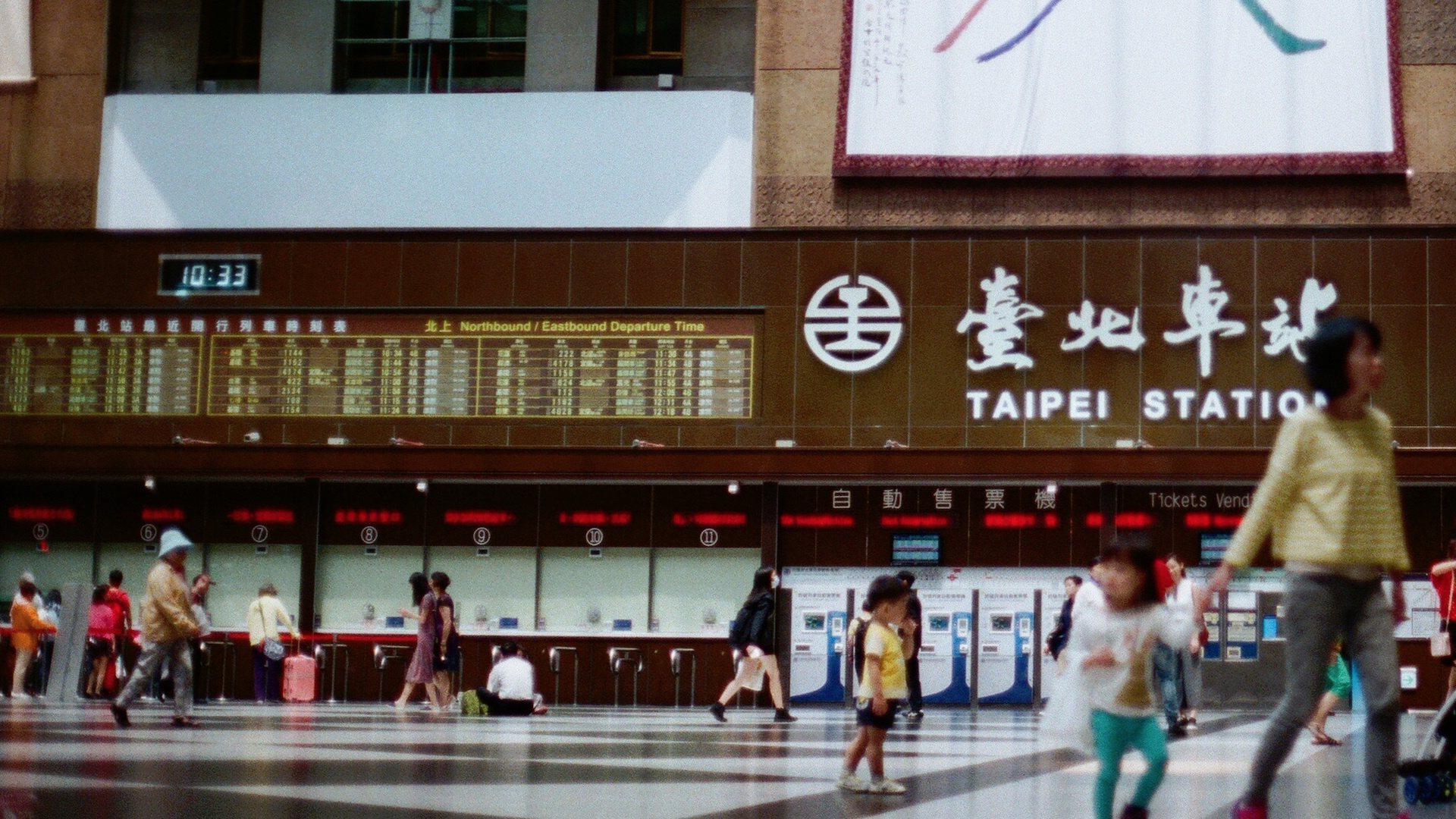 This video, and subsequent article, were presented by Gaudreyt 15th Annual International Meeting of Public Management in Paris, France on the 25th of May, 2016. 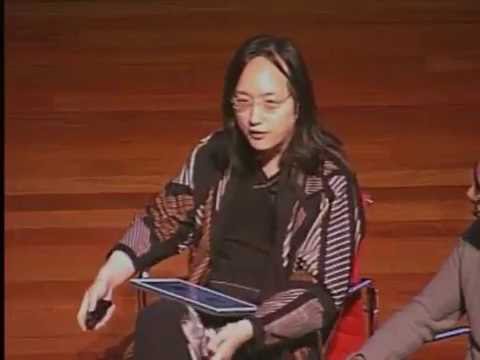 The meme that paralysed the administration 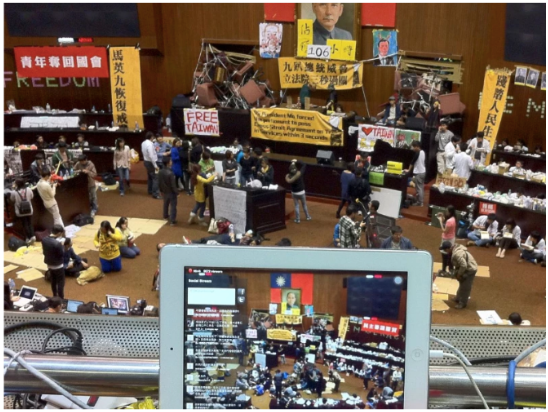 In March 2014, students in the Sunflower movement occupied the Parliament for 22 days. The result has introduced a giant leap in civic participation in Taiwan.

Hundreds of g0v (gov-zero) hacktivists built real-time ICT systems for coordinating supplies, live-streaming, transcription, and translation — broadcasting the demonstration to half a million people on the street and millions more online.

They represented the first generation to speak out freely – free speech was return in 1988 after been banned for 40 years during martial law under the Chiang Kai-Shek dictatorship. The year 1996 brought the first presidential election and the world-wide web. Internet and democracy evolved together, spread together, and integrated with each other. The word ‘free’ in free software has been focused on its social impact as in ‘freedom’. By the end of 2014, city-level elections brought many occupiers into local governments. On the national level, the new Premier reached out to civic hackers to reinvent policymaking. 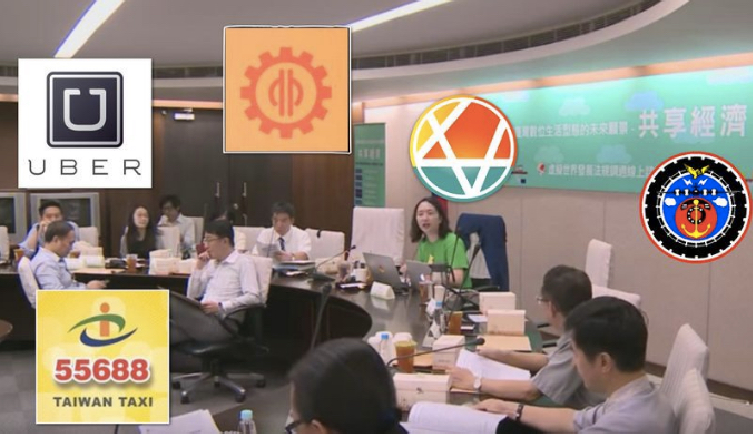 When Uber started riding with its epidemic meme of “sharing economy”, Jaclyn Tsai, the Minister in charge of cyberspace affairs at the time, wanted a discussion that involves all stakeholders. Taiwan doesn’t have a *commission nationale du débat public*, so the Minister joined g0v hackers to invent a deliberative process.

Deliberation, thinking deeply about something together, is an effective vaccine against a virus of the mind. When everyone — passengers and drivers, academics and public servants — listened to each other and formed a consensus, we become immune to divisive PR campaigns in the future.

After Uber, the Airbnb deliberation also went well, with Airbnb sending email to all their Taiwan members, urging them to participate online. Airbnb’s co-founder then visited Taiwan and pledged agreement on all consensus items.

However, if the decision-making process is not transparent, we don’t get access to same facts as the policy-makers. Without considering relevant facts and everyone’s feelings, ideas become ideologies — viruses of the mind that blind people to new facts and to each other’s feelings. 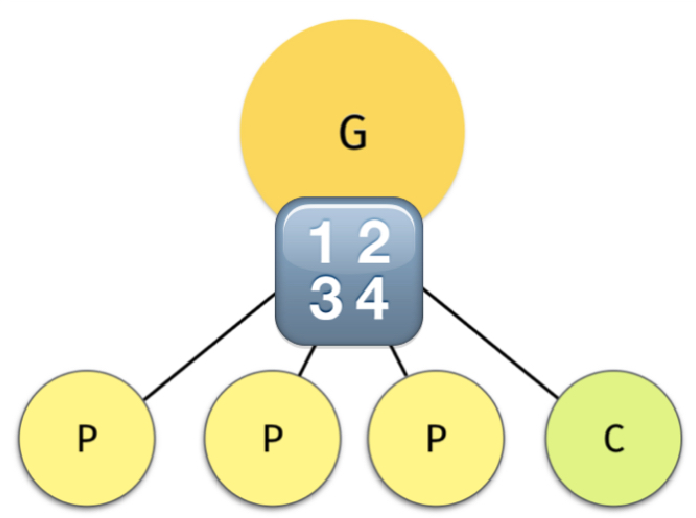 So our first step is open data, that is, making all the facts available. Not just numbers, but also meeting records, studies, analyses — the minister publishes all materials she receives, so everyone can be on the same page. 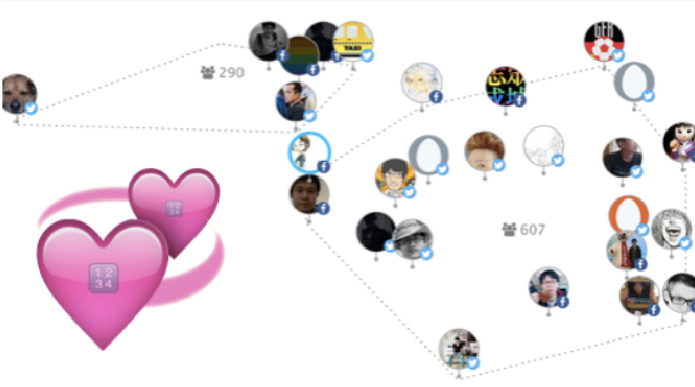 Next, we created an interactive survey. We presented participants in groups and showed yes-or-no statements, one at a time, above them. Each participant had an avatar, and when someone clicked “agree” or “disagree”, their avatar moved toward a group of avatars representing those with similar feelings. The next statement then showed up; everyone could contribute their statements for others to vote on. 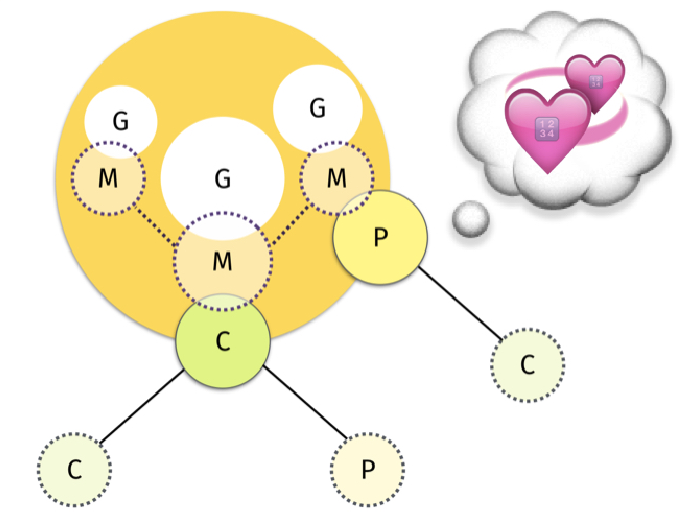 The Pol.is system shows each group how well their shared sentiments are received by other groups, encouraging participants to contribute ever more inclusive statements that show up as “Majority Opinions”, which we promised to use verbatim as the agenda for face-to-face deliberation.

After four weeks, participants had converged on a coherent set of reflections, expectations and suggestions, successfully forming a coherent agenda for the stakeholders to respond in public, broadcast live online and transcribed in real time.

On May 23, the administration pledged to ratify all the deliberation’s consensus items into a new regulation:

While Uber currently resists the last requirement, other Uber-like apps are now entering the market. After Uber, the Airbnb deliberation also went well, with Airbnb sending email to all their Taiwan members, urging them to participate online. Airbnb’s co-founder then visited Taiwan and pledged agreement on all consensus items.

Making the channels of peace

Because we’re all volunteers working in spare time, we rely on free software and automated moderation tools; they have proven to work well under massive scale. However, many national policies face the opposite problem.

Uber and Airbnb are hot topics, but other public issues — such as judicial reform, land-use planning, and cultural policy — don’t get much coverage. The long-form explanations won’t fit into mainstream TV and newspapers, and there are no angle for sensational commentaries.

So by late 2015, ex-occupiers created new media channels, with the same non-profit, open-source, crowd-based techniques from the Sunflower movement. 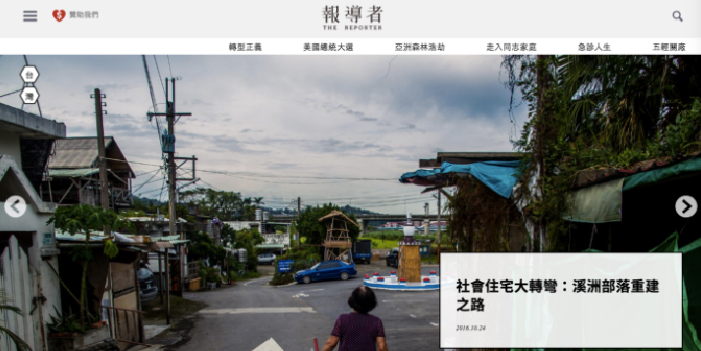 The Reporter, a news website focused on investigative journalism and public issues, received 300,000 euros in donations and 100,000 regular subscribers.

Talk to Taiwan, an interactive web TV-show broadcast every Thursday evening, with a guest specialising on one policy area — the Mayor of Taipei city on Medicare; the outgoing Premier on cyber-infrastructure; and this week, the new minister of culture. 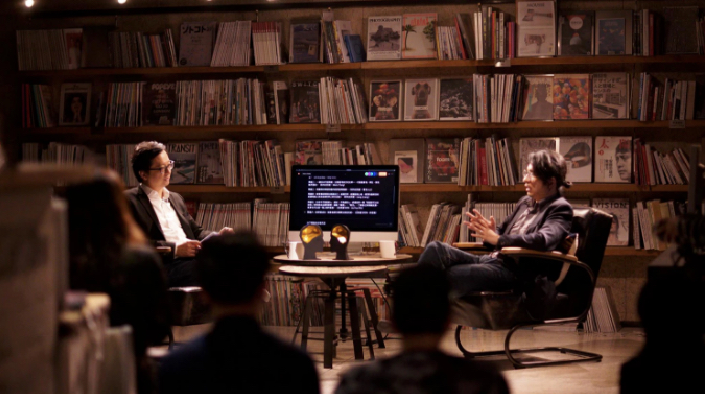 The show’s content is crowd-sourced — every Monday begins with an interactive survey of audience’s reflections, followed by infographic briefs and articles. During the show, the guest takes 40 minutes to convey their vision, and 20 minutes on a rapid-fire Q&A session with the live chatroom — joined by 200,000 viewers to date. 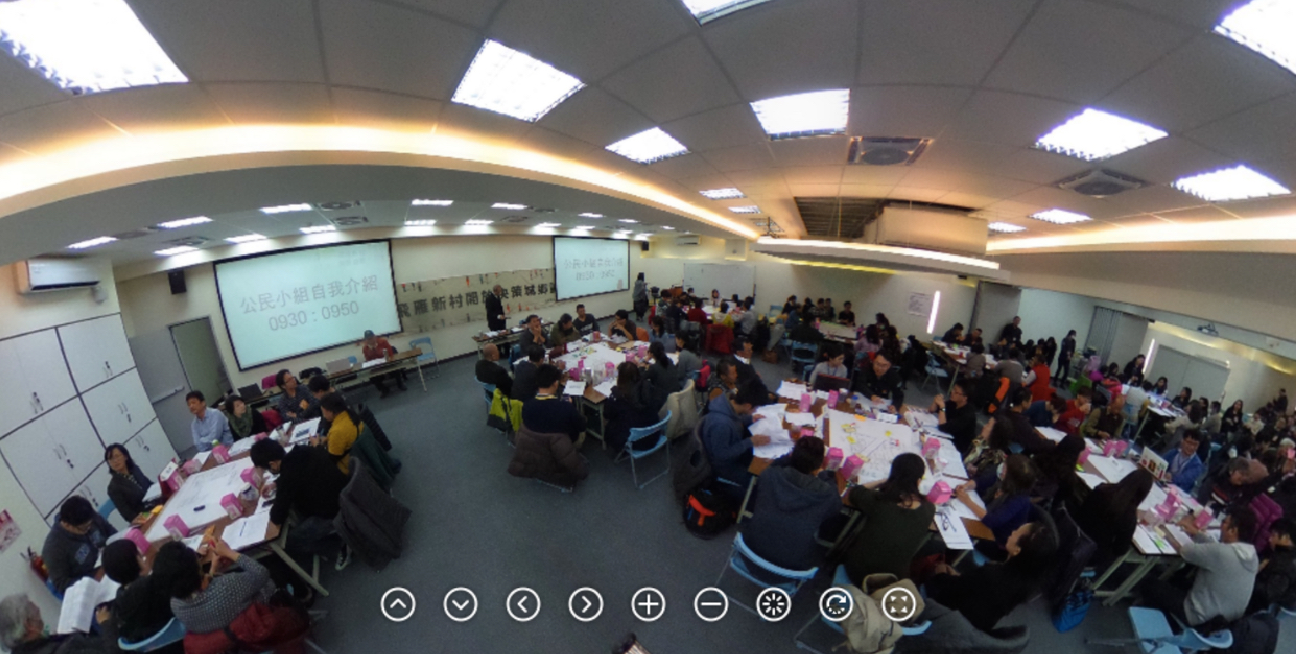 The show was filmed in immersive, high-quality 360 video. This reflective space changed the nature of dialogue. Instead of becoming a blurred talking head speaking to an imagined audience behind the camera, guests felt that they have the full attention from the room, and focused on getting their ideas across — If they tell a joke, viewers can virtually turn around and see if people in the room are laughing or not. 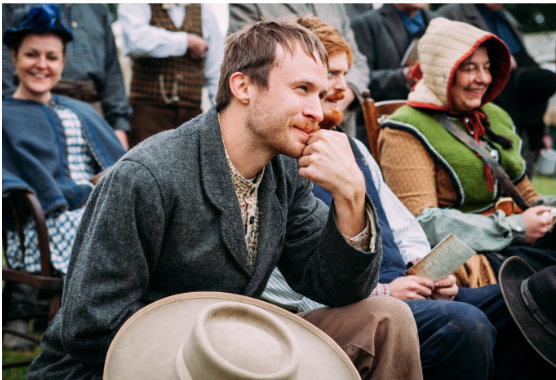 City-level deliberations also blossomed after the Sunflower movement. This February, Tainan city adopted the COP21 World Wide Views method at the Feiyan New Village, a controversial urban renovation site with escalating conflict between the construction company, archeologists, ecologists, and local residents.
Backed by open data and multi-stakeholder briefings, the deliberation successfully defused misunderstandings among hundreds of local residents; they agreed on a set of more moderate suggestions for the city.

As we become more familiar with facilitated hearings and deliberations, large-scale public projects still pose a challenge for us. Take Airports as an example — it’s often one architect’s expertise versus a counter-vision. Citizens may trust one architect over the other, but the diagrams and models are often too abstract for people to make informed choices.

With the national policy of “open data by default”, getting raw measurements published is not the problem — the problem is how to turn them into social objects, around which everyone can make meaningful conversations and contributions.

Democracy as a game

Actually, I’d like to invite you to think of Democracy itself as a game with a purpose, with voting as its entry level, equivalent to clicking “Like” on social media. 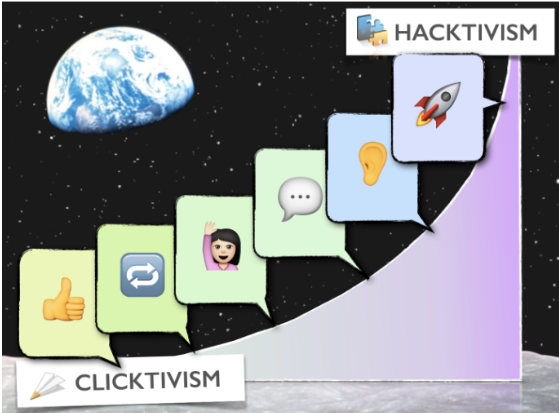 Open data takes it a level further — when all budgets, laws and statistics have their place on the web, we can share their links together to get a bigger picture.

Forums are useful too — when questions are answered in a timely fashion, it bridges the gap between public servants and the civil society.

Then we can have meaningful discussions — where people talk about issues openly, discovering new facts and sharing each others’ feelings.

The final level, true agenda-setting power, can never come from above, because it changes the rule of the game. It only emerges naturally, when we are ready to share the purposes of our lives, through authentic facts, feelings and ideas — not ideologies.

Splitting the world with ideologies and finding comfort in like-minded communities is too easy nowadays, with social technologies acting as filter bubbles. Labor and Capital, Religion and Science — you name it.

However, there is a sense that disruptive technologies — machine learning, virtual reality, self-driving cars — compress the communities, forcing violent clashes, with the ultimate clash in a so-called Technological Singularity, where people lost all agency altogether.

If we are infected with ideologies that limit what an individual can do, then of course it makes us terrified when machines do it better. But it doesn’t need to be this way.

Mathematically, we can resolve many Singularities by plotting them with an extra dimension “t”, making it possible to meet at the origin, listen to each other, meet and listen again, and again.

Through deliberation, we can build together a Plurality among the multitude of people and animals, plants and rivers — and even more importantly, among our own past and future imaginations of ourselves.

The Singularity may be near, but the Plurality is here.

I’d like to conclude this article with these words from President Tsai’s inauguration speech:

This is our experiment in reinventing democracy.

Let’s all keep listening to each other. Thank you for listening.